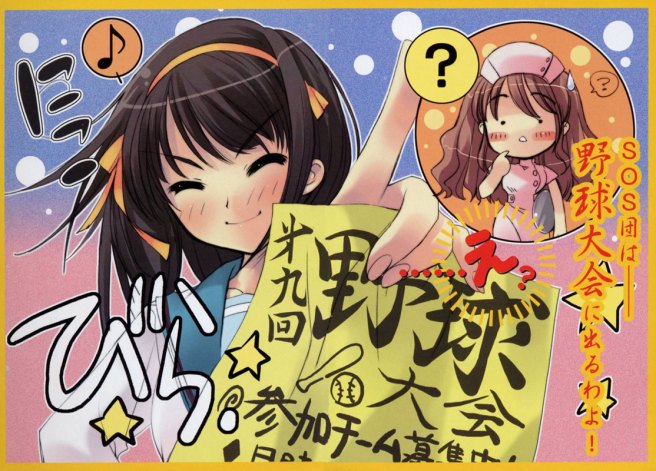 The SOS Brigade will be entering a baseball tournament!

Sup everyone! We’re entering one of the first volumes that comprise of “short” stories. In terms of this book, we have four:

The Boredom of Haruhi Suzumiya, the short story that this entire volume is named after, is sort of a filler. It’s a funny chapter about the SOS Brigade’s attempt at baseball, but nevertheless it’s really weak compared to the other Suzumiya Haruhi arcs, mostly because nothing truly jaw-dropping happens. It’s kind of justified though, since the chapter itself is actually the pilot of the series that was published two months in The Sneaker before The Melancholy of Haruhi Suzumiya ever came out. So it’s only natural that the most we get from this story are very basic showcases of the cast’s personalities and nothing really spectacular. Also, just in case you were wondering, yes – it’s exactly the same as the anime. 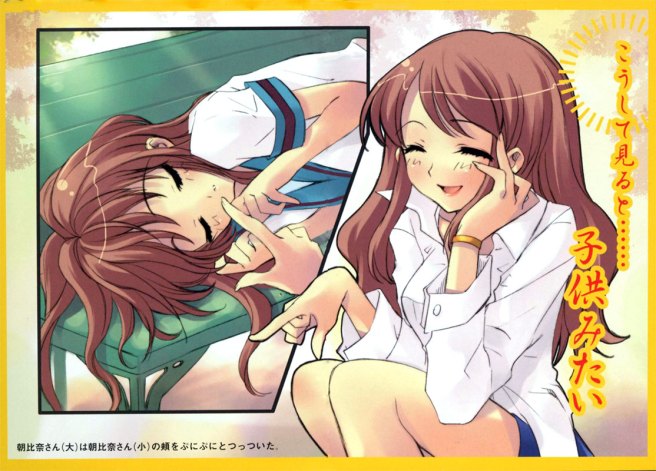 Bamboo Leaf Rhapsody is where the fun of the book really begins, and where the term “three years ago” becomes sort of an arc phrase for the series. And also the first chapter where there’s actual focus on Mikuru being a time traveler… sort of.

Kyon traveling three years into the past, at the request of Asahina Mikuru, where he meets Loli Haruhi and basically helps her do what made her infamous in middle school, which Taniguchi told Kyon about in the first novel, makes a very… intriguing temporal paradox where Kyon is actually the one that inspired Haruhi to look for the supernatural… and the insane adventures that Haruhi drags Kyon along on are ultimately the result of his own actions in the past.

Also, the fact that Kyon and Mikuru ending up being stuck in the past (due to Mikuru being a clutz and breaking her TPDD, which is <classified information>, but apparently it’s like a time machine) and having to have their time stopped and bodies kept safe in Nagato’s apartment until time catches up just adds to this whole time-whimey insanity. Tanigawa Nagaru is definitely having fun playing with time travel tropes.

I dunno. It’s kind of a weird feeling knowing while Nagato first gave Kyon the whole exposition spiel in the first novel, another Kyon and Mikuru were sleeping in the very next room. If you take the three years worth of sleep within time-frozen space and the time loop shenanigans we’ll be getting into in a later novel, you’ll realize that Kyon’s… hell, the rest of the cast’s too… biological age is way disconnected with their chronological age.

The otherwise good translation of the novels gets momentarily stupid in Bamboo leaf Rhapsody. Basically, Kyon in the original Kadokawa edition references the FILP (財政投融資) and what I assume is Japan’s economic system (金制度), whereas Kyon of the Yen Press edition references… Wall Street and Social Security. Which are both really American things. Look, I understand that not all of the readers are going to get references to Japanese society. But the story takes place in fucking Japan. Ergo, common sense says whoever is reading a story set in Japan is going to expect some references related to… Japan. Their heads aren’t going to explode.

Moving on: Mysterique Sign. It’s far better than the baseball short story, but… lacks something that Bamboo Leaf Rhapsody had in the previous story. I dunno, it’s hard to put my finger on it. The Computer Research Society president goes missing, and Kimidori Emiri, who is supposedly his girlfriend, tasks the SOS Brigade to find him. The situation with the alternation dimension and the data lifeform was pretty… surreal, even for Suzumiya Haruhi standards, at least up until this point. The lifeform, apparently awakened when Haruhi created the SOS Brigade logo using the internet, used the Computer Research Society’s brain as a medium to survive longer and took the form of his fears. It takes the shape of a cave cricket in the light novel, but I’m pretty sure it was a different kind of cricket in the anime (I’m gonna continue doing the re-blog of the anime soon, with Kyon appearing yet again as a guest, so my memory will be jogged in due time). Either way, the president is scared of crickets. Hah.

Obviously there weren’t any references to Full Metal Panic! Fumoffu in the light novel version.

By the end of the chapter, it’s clear that Kimidori Emiri, who appeared at the beginning of the chapter, is not the guy’s girlfriend. But another entity that seems to be aware of the nature of the SOS Brigade and Suzumiya Haruhi.

Kyon, could it be that… this person is… dead?

Funnily enough, I loved this story arc in the anime as well. Which is weird, considering it’s… well, the most divergent the anime ever got. Besides turning Endless Eight into an actual eight-part loop that felt endless. I admit that although the animated version has its own KyoAni-induced charms, the novel version of Remote Island Syndrome is better, for many reasons. 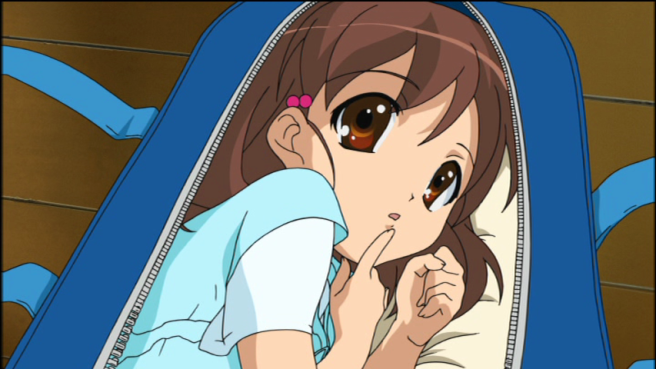 To start off, the light novel didn’t have Kyon’s little sister (who prefers to call him the silly nickname “Kyon” instead of “onii-san“, or hell, his real name which has yet to be revealed) tagging along with the SOS Brigade. I’m assuming one of the reasons Kyoto Animation did this was to keep the high schoolers from indulging and drinking in alcoholic beverages (forbidden on Japanese TV), which they end up doing in the novel. While I like imouto-chan and the Ousama Game they added in to make up for it, I… preferred the SOS Brigade getting their asses drunk. It’s to note that there’s a funny Noodle Incident moment where a drunk Haruhi and Kyon engaged in “disgraceful behavior”, the details of which is never mentioned. It’s kind of weird when Haruhi mentions that they drank alcohol in The Disappearance of Haruhi Suzumiya movie. They didn’t do that in the anime… they did it in the novels.

Anyways, Little Sister’s presence also compelled Kyoto Animation to put it to some importance in the animated version. Which I’ll get into later.

In the novel version, there’s a lot more interaction between Kyon and Koizumi about the inner workings of Haruhi’s subconscious, her desires, and to what degree any of it affects reality. The anime tosses all of this aside in favor of more Kyon and Haruhi interaction. Which I don’t mind in concept, but Kyoto Animation could’ve handled it a lot better without hurting the original novel content. In the novel, when Haruhi and Kyon go outside in the rain to check on the boat, they go back inside when they realize the boat is missing. This is where the anime really diverges from the book – instead of going back inside the mansion, Haruhi thinks she sees someone in the distance, and the two end up tumbling down the island and dry themselves off in a cave.

This is where Kyon and Haruhi start to pander the mystery at hand. Naturally, because the novel version focused more on the Kyon-Koizumi exchanges, Kyon and Koizumi are the ones to think about the “murder” in the novel’s version. While I welcomed the scenes of Haruhi in a bra because Haruh is fucking hot, it’s kind of strange that Haruhi is so… modest around Kyon despite seeing males as nothing more than vegetables as seen in the first novel where she doesn’t mind changing into her gym uniform in front of them. She may have a crush on the guy, but it’s still out-of-character for her to embody the “I have to be modest around my love interest” trope. It’s especially perplexing how they ended up being found and brought back to the mansion in begin with – from the looks of it, there didn’t seem to be any easy way of getting back up. Well, whatever.

Lastly, there’s the final piece of evidence that allows Kyon to deduce the true nature of the events on the island. As everyone remembers from the anime, he noticed the missing steak and leftover carrots from when his little sister was hungry and looking for food. To begin with, there’s already a contradiction in the fact that she wouldn’t be there to begin with since Haruhi ordered Yuki to not open the door for anyone; Little Sister wouldn’t be able to leave the room. Yuki taking things too literal to a whole new level, the novel ends up having a much better and less contrived piece of evidence – when Koizumi wanted to ask Yuki for an estimate for Keiichi’s time of death, he asked her about his body temperature instead. He didn’t ask her about the time of death outright because Yuki would have replied that he wasn’t dead. 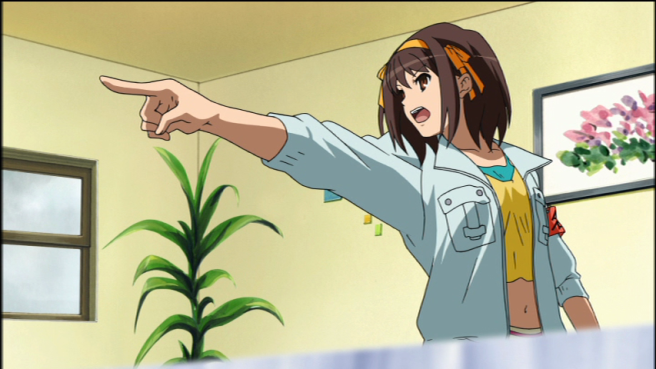 This reference was… objectionable.

While I love Gyakuten Saiban, it was… out-of-the-blue when Kyoto Animation started referencing it in the anime. I liked the reference back when I first watched the anime in middle school, but I don’t know if I still do. In retrospect, it feels a bit tacked on. For starters, it was indeed Kyon, not Haruhi, who deduced most of the mysteries and well… has a personality that’s even remotely like Ryuuichi/Phoenix. Koizumi’s hardly anything like Mitsurugi/Edgeworth either.

I still love this story arc either way, whether in novel or anime form. The anime version is… kind of off the mark as it portrays the main thing as a “murder mystery solved by the SOS Brigade!” rather than a look into Haruhi in relation to the mystery. But it still successfully concluded that, although Haruhi wishes for insane things such as a murder mystery, she would never will someone to get murdered for the sake of it. Although, the anime adds an unfortunate implication that Haruhi subconsciously created something that’s still lurking on the island in response to wanting nobody to be the true culprit of the mysteru… Sorry, Tamaru brothers. Your lives are at the hand of Kyoto Animation creating an excuse to momentarily seclude Kyon and Haruhi from the others.

I’m pretty sure the anime also added a James Bond reference or something with Koizumi staring intensely at a mole on the back of Kyon’s neck. When I first saw this, I was just assuming they were adding more homoerotic sub-context. Whatever the case, I still love the anime to death and wished Kyoto Animation adapted the later books. But alas, Kadokawa and their marketing. Tanigawa Nagaru and his hiatuses. The bane. Of. Me.

Anyways, let’s move onto The Disappearance of Haruhi Suzumiya… next time! 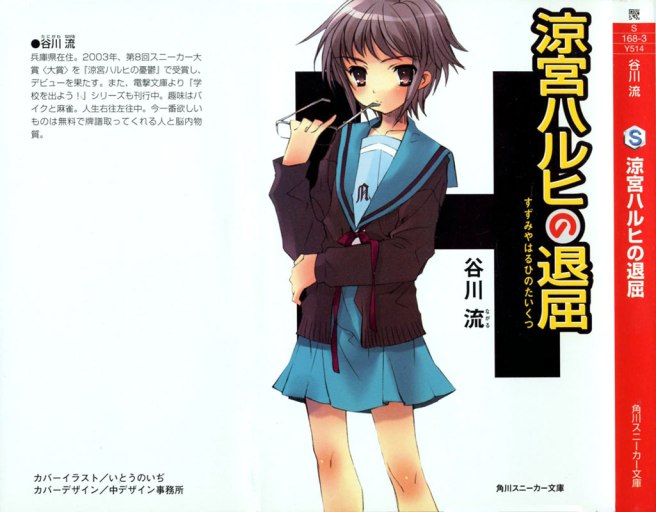