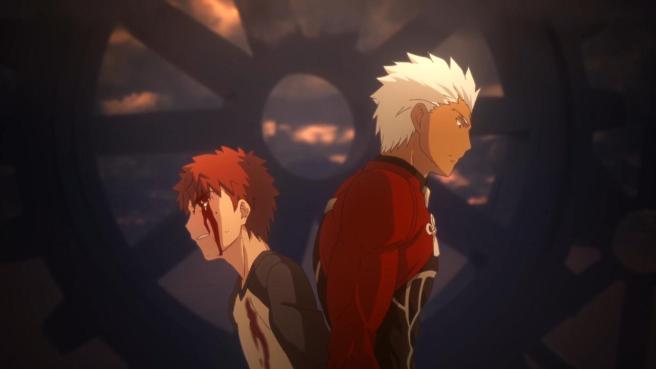 Looks like it’s time for Shirou’s epic therapy session. Arguably the most entertaining episode yet in terms of presentation. Although I have my gripes, it was… pretty dope. 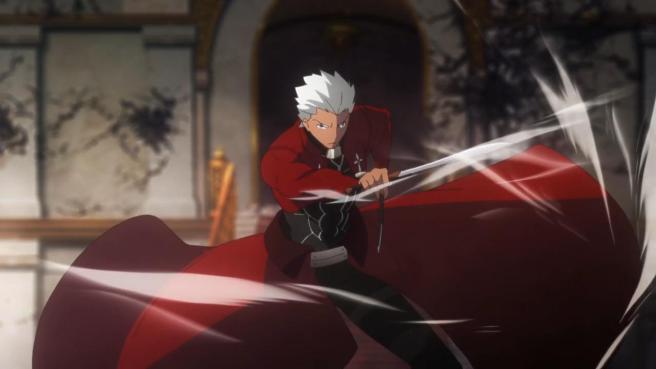 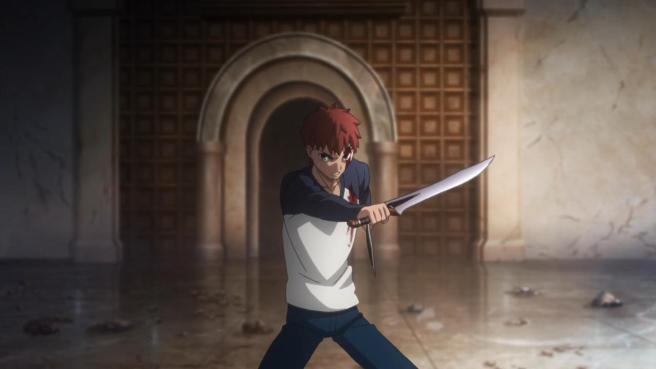 I enjoyed how Ufotable transitioned Archer’s battle experience flowing into Shirou to animation. Although the animation was a bit derpy (I’m sure they’ll fix that in the Blu-rays), seeing Shirous perfect mimicry of his future self’s techniques was pretty cool. 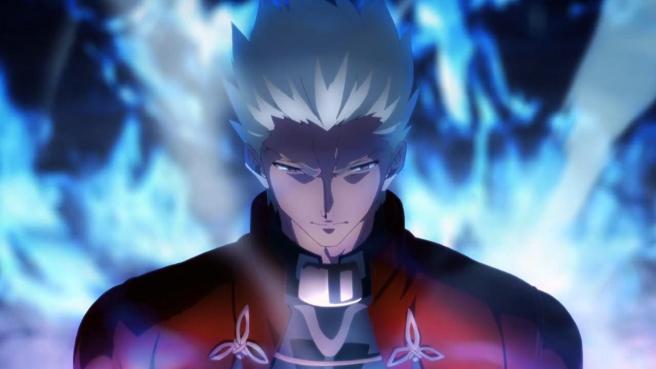 Archer invoking Unlimited Blade Works is kind of a double-edged sword for this adaptation. While it serves as a really nice backdrop, and it makes sense for Archer to want to break Shirou within his mental world, it… doesn’t make sense for Archer to use and maintain it in the first place given his current state. Note that the first time he used it a couple of episodes ago, it shattered within minutes.

Plus, nothing is stopping Archer from doing a sword rain on Shirou while in Unlimited Blade Works (and he doesn’t). 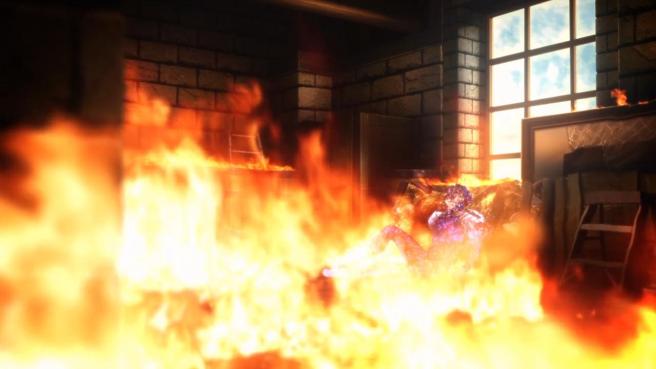 They didn’t do a bad job at all, but for some reason Lancer’s heroic sacrifice here didn’t have the same impact on me as it did in the VN. Perhaps it was the lack of 消えない思い (Ever-present feeling) that did it in…

Would have been neat to see Lancer think about Bazette when he talked to Rin about his bad luck with women.

As a side note, I always loved how Chu went out in a way that ended up being a gigantic middle finger to how Diarmuid died in Fate/Zero. A suicide Command Spell isn’t enough to take down a real Heroic Spirit – instead of cursing his fate, Chu took out Kotomine with him and departed the Holy Grail War as a hero.

(Also, no, it’s not an asspull – it’s his personal Battle Continuation skill, representing his tenacity to defeat his opponents in life even when he was given mortal wounds that ended up killing him eventually. It’s in his damned legend.) 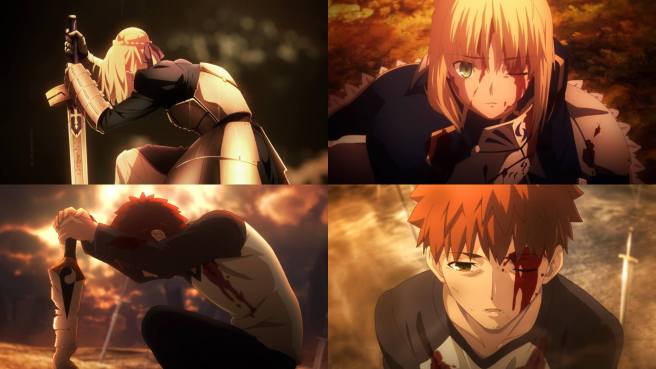 Kudos to Ufotable for expanding more on how Archer/Shirou’s conflict connects with and helps Saber resolve her own turmoils during the UBW route.

(Reminders:
The Fate route will never have a proper adaptation.
Last Episode will never be animated.
QQ Saber fans) 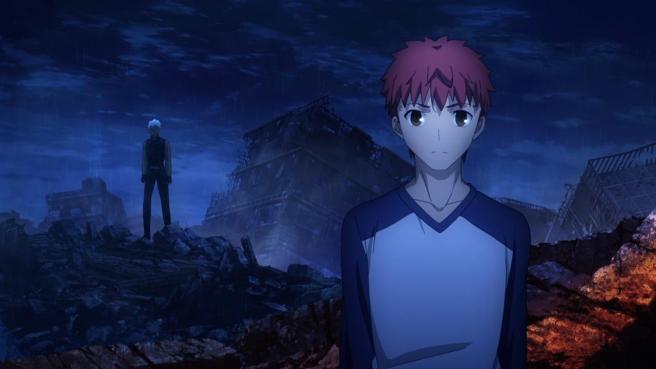 The anime does a really good job of portraying Shirou’s look into Archer’s memories and also adapting the majority of their monologue during their battle. The anime-original additions such as the scenes up until Avalon regenerates Shirou’s body, for the most part, are welcome. And I absolutely loved the Kalafina insert song accompanying them. 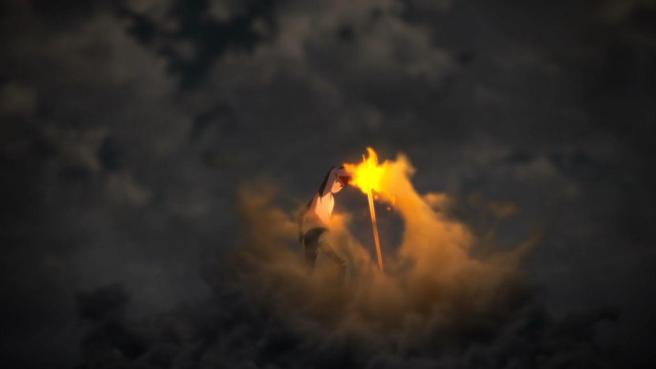 Speaking of which, the bit where Shirou pulls out the sword within his own hill of blades reminds me a lot of the second opening of the original PC version of the visual novel:

Both scenes mirror Arturia pulling out the Sword of Promised Victory, resigning herself to the fate of a King (in Shirou’s case, an Ally of Justice) for the sake of others. 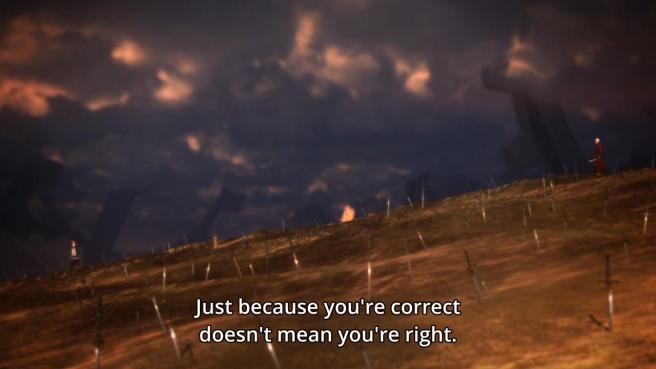 *sigh* Another case of stilted subtitles meme-ifying Shirou’s dialogue. The gist of it is “Just because you’re right doesn’t mean it’s the only possible answer!” or something along those lines. 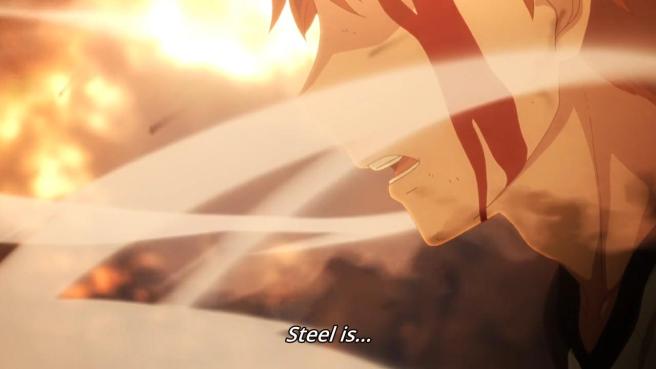 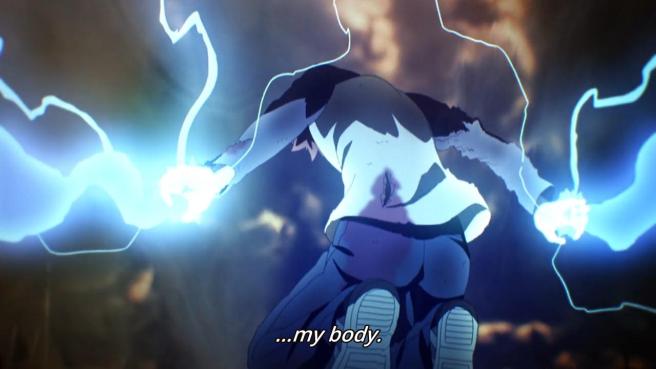 Apparently they fixed it later, but this is the version I saw.

What Aniplex was looking for is “My body is made of swords,” or since they’re apparently going for full-English aria mode (again)… 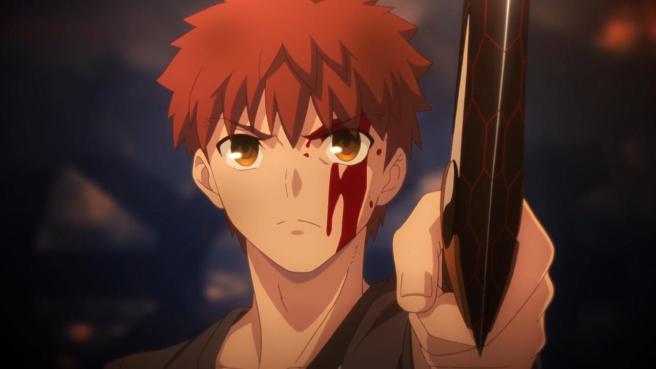