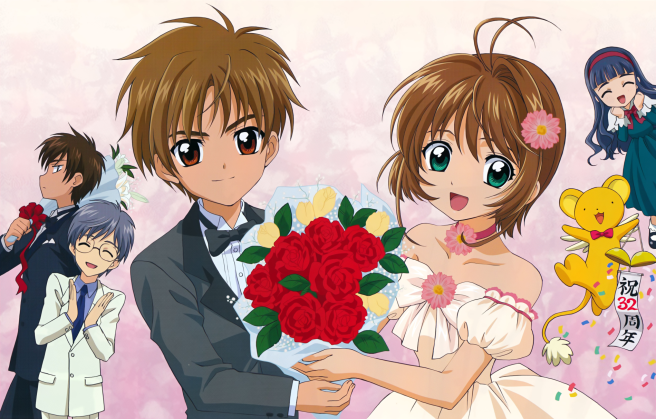 When Nippon Ichi Software America released their premium edition of the Cardcaptor Sakura Blu-ray collection in 2014, I was obviously the happiest person on Earth finally being able to own the definitive viewing experience of possibly one the cutest anime series in existence, at an affordable price. And everything was almost perfect, especially the video transfer. It’s exactly the same as the Japanese release.

But there’s one thing that went wrong with this release: the subtitles. Now, it’s no secret that NISA translations are really, really bad. True to form, the subtitles are pretty iffy here and there. Naturally, it’s not a bad as Nelvana’s retool hackjob of a dub “Cardcaptors” back in the early 2000’s, which was quite frankly the devil’s incarnate. In comparison, iffy subtitles are incredibly minor and a godsend. But there’s one translation flub present in this release that is rather bothersome. And that is, Sakura calling Syaoran her “bestie”.

Now, for context, up until a certain point later in the series, Sakura calls Syaoran by his surname (“Li”). However, in the NISA subtitles, they decided to have Sakura call him by his first name (transliterated in Pinyin as Xiaolang, which is also correct), possibly because they wanted to localize it for EOPs or something. I dunno.

What they didn’t foresee is it becoming a plot point later on. After one of the sweetest moments that ever happens between the two, Sakura offers to call Syaoran by his first name. Now, in Japan, referring to someone by their first name indicates a level of intimacy and closeness between yourself and that individual. However, they clearly fucked this up from the get-go in the English subtitles and it was apparently too late for them to backtrack. So what do they do? Well, keep it “Xiaolang” in the aforementioned scene, but then have it so that Sakura starts calling him “bestie” to explain a surprised reaction from Tomoyo in a later episode, which veers completely off from the connotation CLAMP was going for with Sakura’s character development.

However, instead of the translation/editing team being complete dummies, it seems to mostly have been an oversight from someone who clearly wasn’t familiar with the series beforehand, and as said before, they were too far into the project to go back and correct everything. But that’s just me giving them the benefit of the doubt. Alternatively, it’s also possible that the person behind this translation genuinely thought it was a good fucking idea, it’s extremely believable if you’ve ever experienced people (either in general or just from the industry itself). I still don’t agree with the decision. This goes with my belief that one pointless change will always potentially spiral into a bigger problem, inciting more changes.

Even the Animax dub that comes included with the set didn’t fuck around with this. Hell, this whole thing is one of those rare occasions where an English dub is more faithful than the “professional” subtitled version.

(Context: Sakura realizes how close Syaoran’s gotten with her, being so happy he called her “Sakura” in the elevator. NISA subbed Sakura is happy he was concerned.)

Sakura: Hey, since it feels like I’ve become really close to Li-kun… is it okay if I called you “Syaoran-kun” from now on?
Syaoron: D…-do as you like.
Sakura: Okay, Syaoran-kun! See you tomorrow at school then!

Sakura: Now that we’re closer, do you think it’s okay if I call you “Syaoran”?
Syaoran: If you want to…
Sakura: Good! Bye Syaoran!

Sakura: I feel like I’ve become really good friends with you. Hey, Xiaolang, do you feel that too?
Xiaolang: I-I guess if you feel like that…
Sakura: Okay, Xiaolang!

(^ NISA sure are masters of naturally flowing dialogue…)

Sakura: Thanks, Syaoran-kun.
Tomoyo: “Syaoran-kun”?
(Syaoran BLUSHES)
Sakura: Yup! That time back when we were trapped in the elevator, he told me I could call him Syaoran-kun. And he said he would call me Sakura.
Tomoyo: Oh my!
Sakura: Right, Syaoran-kun?

Sakura: Thanks Syaoran.
Tomoyo: Huh, “Syaoran”?
[Syaoran BLUSHES]
Sakura: Yeah. The other day when we were stuck in the elevator together, he said I could call him Syaoran, and then he said that he’d call me Sakura too!
Tomoyo: Wow!
Sakura: Isn’t that right, Syaoran?

Sakura: Thanks bestie.
Tomoyo: “Bestie”?
[Xiaolang BLUSHES]
Sakura: Yeah. When we got trapped in the elevator a few days ago, I think we became better friends. And, he said that he thinks so too.
Tomoyo: Oh!
Sakura: Right, Xiaolang?

It’s one thing to change Snow Rabbit to Yukitoad (okay, it’s still terrible, but at least it’s funny), changing Japanese-only honorifics to close English equivalents (-san to Mr/Mrs., etc), reworking Japanese puns so they resonate better with an English audience, but holy fucking shit, if a character calls another character by their last name or first name, just leave it as-is. Especially when it isn’t a dub. Senior/junior relations and last/first name basis isn’t that crazy of a concept to grasp to begin with, especially for people who watch Japanese anime with English subtitles.

I can somewhat see the point of Americanizing dialogue to a certain extent in English dubs aimed at your typical Super EOP, but I never got the point of being super anal about it when it comes to subtitling Japanese dialogue. There’s an attempt at being accessible to an outside audience, and then there’s an attempt at being accessible to an outside audience who isn’t going to be watching it subtitled or even buying the entire collection to begin with after watching it on Soggyroll. But I’m digressing a bit – I’ll just summarize by saying the large amounts Cardcaptor Sakura fans really aren’t that confused by the way characters refer to each other in the anime and manga. Don’t try to fix what isn’t broken.

That aside, what about my obvious audience-surrogate-character-even-though-she’s-rich-and-I’m-not Queen Tomoyo? If Syaoran’s not only Sakura’s soul mate, but her “bestie” as well, what of Tomoyo? Chopped liver? Sorry Syaoran, there is only room for one bestie here.

This isn’t the first nor last time NISA makes a localization decision for literal dummies even in an otherwise solid release, but messing with CCS of all things is downright sacrilege in this neighborhood. Until next time.